God is raising up HIS children, His righteous heirs. No longer will they be allowed to touch thine anointed. Pray and Watch! The Lord is causing your enemies to sit at your feet and learn of Him. The sword that was pointed at you, they will turn on themselves. Continue to Stay In Position, Stay In Alignment! If you have anything against your brethren leave it at the Lords feet and repent, so that you will not be held guilty just the same.

The Lord is ‪#‎UPROOTING‬ the strong enemy, ‪#‎PullingDown‬ vain glories,‪#‎VINDICATING‬ & ‪#‎RESTORING‬ what the enemy has stolen. According to Joel 2:18-27 (AMP)…

Deliverance Promised
18
Then the Lord will be jealous for His land [ready to defend it since it is rightfully and uniquely His]
And will have compassion on His people [and will spare them].
19
The Lord will answer and say to His people,
“Behold, I am going to send you grain and new wine and oil,
And you will be satisfied in full with them;
And I will never again make you an object of ridicule among the [Gentile] nations.
20
“But I will remove the northern army far away from you,
And I will drive it into a parched and desolate land,
With its forward guard into the eastern sea (Dead Sea)
And with its rear guard into the western sea (Mediterranean Sea).
And its stench will arise and its foul odor of decay will come up [this is the fate of the northern army in the final day of the Lord],
For [a]He has done great things.”
21
Do not fear, O land; be glad and rejoice,
For the Lord has done great things!
22
Do not be afraid, you animals of the field,
For the pastures of the wilderness have turned green;
The tree has produced its fruit,
And the fig tree and the vine have yielded in full.
23
So rejoice, O children of Zion,
And delight in the Lord, your God;
For He has given you the early [autumn] rain in vindication
And He has poured down the rain for you,
The early [autumn] rain and the late [spring] rain, as before.
24
And the threshing floors shall be full of grain,
And the vats shall overflow with new wine and oil.
25
“And I will compensate you for the years
That the swarming locust has eaten,
The creeping locust, the stripping locust, and the gnawing locust—
My great army which I sent among you.
26
“You will have plenty to eat and be satisfied
And praise the name of the Lord your God
Who has dealt wondrously with you;
And My people shall never be put to shame.
27
“And you shall know [without any doubt] that I am in the midst of Israel [to protect and bless you],
And that I am the Lord your God,
And there is no other;
My people will never be put to shame.

‪#‎UNCHNED‬ In His Presence, A-M 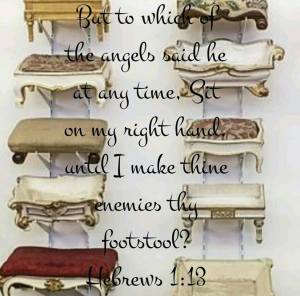